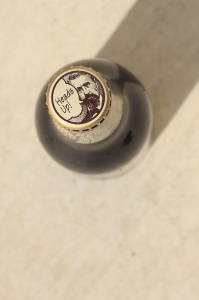 Because I have known this root beer for decades, I was surprised I was unable to find much information about it on the internet.  The Henry Weinhard website highlights its alcoholic beverages, and mentions root beer only in passing in its discussion of the history of the brewery.  During prohibition, Henry Weinhard’s premium sodas, syrups, and non-alcoholic beers kept the Portland, Oregon brewery afloat.  According to Wikipedia, Henry Weinhard’s gourmet soda distribution is based out of Fort Worth, Texas.

I may be biased due to my preexisting relationship with Henry Weinhard’s Root Beer, but the Henry Wienhard’s label is well thought out and business like, conveying the image that this is a gourmet root beer that should be taken seriously.  The label exhibits textured, antique root beer barrels, displays the stoic 19th Century portrait of root beer baron Henry Weinhard, and uses an eye-catching font to advertise its root beer.  To pull it all together,  Henry Weinhard’s black label gives it the air of a private reserve soda; like this is the root beer equivalent of the American Express Centurion Card, and you are lucky to have come into contact with one.

If you do come in contact with this root beer, what can you expect?  First off, I do not regularly mention root beer head in my reviews, but the head on this root beer deserves mention.  It is frothy, massive, and second to none.  Quite impressive, really.  As for the taste, Henry Weinhard’s is a three act play.  The first act is an herbal and slightly bitter, but not unpleasant, root beer bite.  The next act spotlights a deep, dark, rich caramel creaminess.  Finally, Henry Weinhard’s leaves you with a pleasing, soft honey aftertaste.  This is a play I would be happy to see again.  Henry Weinhard’s hold’s itself together well, and provided me with a nice jaunt down memory lane. 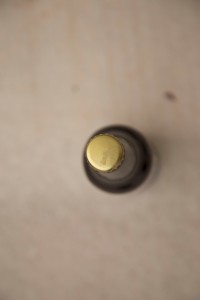 The world owes a great debt to Orca Beverage Soda Works.  We have mentioned Orca before.  They manufacturer and bottle specialty and retro soda beverages, including several root beer sodas.  They have brought back to life sodas which had not been produced for years.  Bulldog Root Beer was not brought back to life by Orca, but was given life in 1997 when it when it was created.  According to the Bulldog website, it took only 9 test batches to develop the recipe for Bulldog.  They developed a winner.

Bulldog’s slogan is “Unleash the Taste.”  This slogan, combined with the name Bulldog and the picture of two powerful, although seemingly friendly, bulldogs on its label led me to believe that this root beer would be a powerful, strong, rip-your-throat-out root beer.  I know people love bulldogs, but when I think of bulldogs or hear, “he’s a bulldog,” I conjure an image of the rough, the tough, and the cut throat.  The name and mascot are fine, but to me the image created by the word bulldog do not at all describe the character of this root beer.  It won’t rip your throat out, but it may disable you with its silky goodness.

Bulldog Root Beer is light on carbonation.  It has a velvety smooth root beer flavor.  Although Bulldog uses real vanilla, which I assume adds to the creamy smoothness of the root beer, it did not taste like vanilla.  Instead, the star of this root beer is the honey.  The honey provides the perfect sweetness and perfect compliment to the root beer.  It is as if the honey root beer fluid envelopes your tongue in absolute goodness.  There is no doubt about it, this is a top root beer contender.

This root beer grew on me.  The first few sips were alright, but nothing special.  As a drank, however, the flavors distinguished themselves, resulting in a quite tasty root beer.  Old Town Rootbeer Company Root Beer has a sugary caramel flavor.  The caramel quality then  gives way to the taste of a touch of honey, and a hint of molasses.  The flavors work  well together.  The honey was an especially welcome flavor.  I thought this root beer had just the right strength, and was a worthwhile root beer offering. 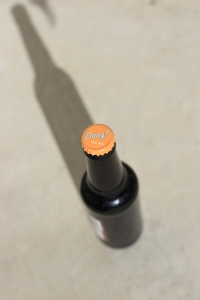 I am not entirely sure whether the name of this root beer is Dang! That’s Good Root Beer, or simply Dang! Root Beer, about which the drinker of said root beer has declared, “That’s Good.”   Either way, it’s not often that you find a product with an exclamation point in the middle of it’s name.  I imagine Elaine from Seinfeld would be pleased at the use of the oft overlooked exclamation point.

Although this root beer self-proclaims its goodness, it rightfully makes no claims as to the excellence of its label design.  It is pretty boring, exclamation point notwithstanding.  Perhaps the company has such confidence in its root beer that they do not want any other sense distracting from the taste experience.

Apparently, previous iterations of this soda used high fructose corn syrup.  The soda I drank for this review was made with sugar.  Dang! has a decent level of  sweetness, and is a fairly straight forward root beer.  It has a somewhat herbal flavor, but not a strong bite.  It is a good middle of the road root beer that would likely be enjoyed by everyone in a given group.  Is it good?  Absolutely!  Is it Dang! good?  I wouldn’t go that far.

The hallmark of Frostie brand sodas is their Santa Claus mascot.  I imagine this cartoon figure has remained the same since the 1970’s.  He is a very jolly Santa who looks like a mix between Santa and a wizard.  I don’t think this Santa needs reindeer.  He should be able to fly from chimney to chimney by flapping his long, upward-turned mustache.  There was some confusion in my house over the red circle covering Santa’s ear.  I thought it was likely an earmuff, although I wouldn’t think Santa would need earmuffs, but my daughter commented that it looks like a cookie.  We may never know the truth.  Regardless, the cartoon Santa does work well with the snow-capped letters that spell out the name of the soda – Frostie.

Big surprise, Frostie Vanilla Root Beer tastes like vanilla.  Unfortunately, I did not find the heavenly vanilla flavor capable of soothing you straight into a coma, that I had remembered.  In fact this time, I liked the vanilla version slightly less than the original Frostie Root Beer.  However, Frostie Vanilla Root Beer is not a bad drink.  The root beer flavor is not very strong, as you would expect from a vanilla root beer, and the vanilla is fairly creamy.  If you like vanilla, you should enjoy this.  Perhaps my expectations for this drink based on my satisfying memories were unrealistic and unfair. 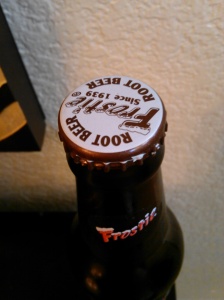 Frostie Root Beer began in 1939 when George Rackensperger (delicious sounding name, right?) opened a bottling plant in an abandoned jailhouse in a suburb of Baltimore, Maryland.  Frostie Root Beer quickly became Rackensperger’s top selling product, resulting in numerous distributors in nearby counties requesting authorization to bottle and sell the product.  In 1947, The Frostie Company was organized as a parent organization to manage the franchised beverage.  In recent decades, the Frostie brand has been sold several times, and is now owned by Intrastate Distributor’s Inc.

The Frostie webpage does not say much about the brand or the root beer, other than to state “You’ll love it,” and to announce that Frostie is made from the “Original 1939 Formula.”  I suppose a root beer recipe is a formula, but referring to it as a formula does not have a tasty ring to it.

Luckily the Frostie Root Beer formula is pretty good.  Frostie Root Beer is about as close as you can get to a classic root beer taste.  It has a nice smooth, slightly vanilla flavor.  It is the root beer flavor you will recall enjoying as a kid on a hot summer night.  There are no exotic frills with this root beer, but but it is the epitome of a solid soda.

What better way to start 2015 than with a review of Sioux City Birch Beer?  Sioux City is one of those soda producers which is kind enough to make each class of soda reviewed by Root Beer Respect; root beer, sarsaparilla, and birch beer.  Sioux City Birch Beer follows the mold of other Sioux City sodas by depicting a nineteenth century man engaged in some kind of nineteenth century act on its bottle.  This soda shows a sabre wielding man, perhaps a military man, atop a horse and ready to attack Indians, or criminals, or perhaps just anyone who would get in the way of him enjoying some good birch beer.  This illustration set in green pops out against the cough drop red background of the soda contained in the clear glass bottle.  Sadly, when all of the soda has been consumed, and there is no dark red background, the illustration is difficult to decipher.  As a result, I recommend that as soon as you finish a Sioux City Birch Beer, you replace it with a brand new bottle.