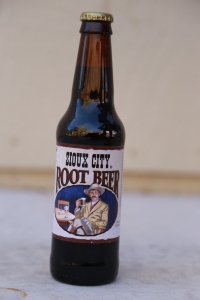 Gale Gand is a woman who wears many hats.  She is a pastry chef, restaurateur, cookbook author, television personality, mother, and root beer maker.  Years ago, Gale was working in England and had no access to root beer.  She got a little brown terrier and named him Rootie, but she had to wait until her return to the United States to enjoy a cold root beer.  Not only did Gale drink root beer upon her return, she also started making root beer to sell in her restaurants.

Rootie is featured on the Gale’s Root Beer label alongside a young girl, likely a young Gale or Gale’s daughter.  The girl is holding a bottle of root beer while withstanding a gale (see the fun word play?).  The label has the feel of a homemade labor of love, not of a mass produced soda. 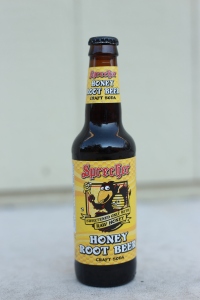 Purchase Location: Obtained through a trade

In late April, 2015, Sprecher Brewing Company announced that in celebration of its 30th anniversary, it would release a limited edition honey root beer.  Root Beer Respect’s blog post covering the announcement can be found here.  Sprecher, a Wisconsin brewery, announced that its anniversary honey root beer would be the first ever root beer sweetened with 100% Wisconsin honey.  However, Sprecher also made it know that only 3,000 cases of this special root beer would be made.

Upon reading the announcement, I became very excited at the thought of enjoying a one-of-a-kind root beer sweetened with such a pure, natural, and delectable sweetener.  I was, however, more than a bit concerned that if I did not find a bottle from one of the 3000 cases produced, I would never participate in the Sprecher Honey Root Beer experience.  Searching for the special edition root beer in my sparse local inventory was fruitless.  Luckily, a fellow root beer aficionado from Southern California was willing to trade.

Sprecher Honey Root Beer is all about highlighting its raw Wisconsin honey sweetener.  The background of the label shows a river of honey flowing between honeycomb river banks.  In the forefront a banner states “Sweetened Only With Raw Honey”, and the Sprecher crow mascot is found holding a beehive in one hand and a honey dipper in the other.  All of these not so subtle honey cues gave me the expectation that I would be carried away by a river of liquified honey root beer goodness.  My first sip of Sprecher Honey Root Beer had tones of honey, but the flavor quickly turned to an unwelcome soapy flavor.  I convinced myself my palate had misunderstood the flavor, and I gave it another try.  Once again, it tasted like I was drinking soap.  This routine continued over and over.   Before each sip, I would try to convince myself that the true, delicious flavor would come forward this time.  With each sip I was disappointed.

I came away knowing that either raw Wisconsin honey is the worst of all honey, or Sprecher Honey Root Beer is just bad.  Because I have faith in Wisconsin bees, I must conclude that Sprecher Honey Root Beer is just bad.  On the one hand, it is disappointing that this limited edition soda did not live up to expectations.  However, on the bright side, because of its limited release I may never come across this soda again. 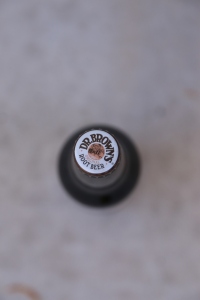 Dr. Brown’s is a New York soda company with a long history.  The brand was created in 1869 and sold its tonic in New York delicatessens and door to door in Jewish neighborhoods.  Nearly two decades later, in 1886, the company began bottling its soda.  Dr. Brown’s has made a celery flavored drink since the company’s inception.  Initially it was called Dr. Brown’s Celery Tonic.  Today the soda, which I would never have guessed existed, is sold as Dr. Brown’s Cel-Ray.

Dr. Brown’s Root Beer is made with sugar and/or high fructose corn syrup.  I am unsure whether I taste-tested an all sugar version, an all HFCS version, or a mixture of the two.  I do find the and/or ingredient listing to be interesting.  As I imagine it, Dr. Brown’s had a big pile of sugar that it mixed into its root beer batches until the pile ran low.  The root beer brewers looked around and found some containers of corn syrup.  Happy that they didn’t have to drive to the local grocery store to buy more sugar, they dumped the corn syrup in the pot and added an “and/or” to the label.

Dr. Brown’s Root Beer is a middle of the road soda.  It is good enough, but not outstanding.  It has a typical, although slightly mild root beer taste.  There is nothing off-putting about Dr. Brown’s, but no element of the soda really stands out either.  You can probably count on Dr. Brown’s not to offend anyone at a friendly gathering.  However, if you are looking to impress with a top of the line root beer, there are certainly better drinks out there. 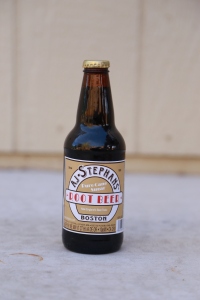 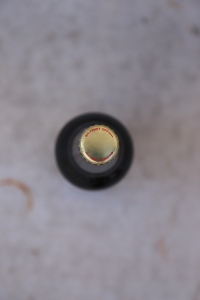 AJ Stephans is a New England company established in 1926.  AJ Stephans is most well known for its ginger beer, which I have not yet tried.  Its root beer is made with an interesting list of ingredients: pure carbonated water, cane sugar, flavor, caramel color, and sodium benzoate as a preservative.  I am not an expert on the government standards for listing the ingredients for foods and beverages, but listing “flavor” as an ingredient seems a little broad.  If flavor is an ingredient, shouldn’t pretty much every food and beverage have it listed as an ingredient?  I mean, who wants to eat or drink something without flavor?

I can confirm that AJ Stephans Root Beer does in fact have flavor.   It has a rich root beer flavor.  It is sweet and deep, and just about everything you could want in a root beer.  Unfortunately, AJ Stephans has another flavor, an aftertaste which may make you forget about the original root beer flavor.  The aftertaste is slightly metallic.  The more I had, the more it reminded me of the taste of blood.  You know when you bite your tongue and get that blood taste in your mouth?  That is similar to this aftertaste.  Maybe there is a reason AJ Stephans does not expound on the ingredient “flavor.”  Kind of disappointing after a good start.