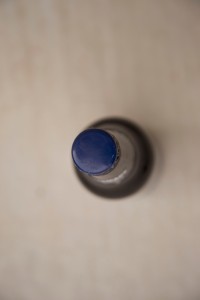 Americana’s label is very appropriate for a root beer that wants to be taken seriously.  It throws out credibility boosting phrases such as “handcrafted” and “delicious vintage.”  Its credibility is further enhanced by the name Americana.  After all, the United States of America is the greatest country on earth.  A root beer referring to the heritage of the U.S. must be legit.

Americana is in fact legit.  It also has quite a unique flavor.  It starts off with a fruity tang.  It is a sugary fruit flavor, likely resulting from the citric acid used in Americana.  The fruity highlight on top of the nice, creamy root beer base was the main flavor over the first few sips.  Later on, I found the fruit flavor to be less pronounced, giving way to a caramel, and very slight licorice, flavor on top of the root base.  Sometimes fruity flavors don’t mesh well with others, but I thought it worked well with Americana.  I will definitely drink this one again.

The story of Sparky’s Fresh Draft Root Beer Root Beer begins in the 1980s when Kevin Knox began experimenting with a home brewing kit in Pacific Grove, California.  He had success brewing alcoholic beverages, but wanted to add a soda to his repertoire to give to friends and family.  Kevin fine-tuned his recipe by way of homemade 5 gallon batches.  On April 1, 2000, Sparky’s Fresh Draft Root Beer Root Beer became available to the public for the first time.

The Sparky’s label has a homemade feel, harkening back the not so distant past when Sparky’s was homemade in 5 gallon batches.  Kevin Knox’s signature is on every bottle, suggesting that he still signs off on every root beer bottle.  The label shows a hand holding an extra fizzy glass full of root beer.  Due to the low-end illustration, the fingers holding the glass could be confused with a pile of rocks or jelly beans, but Sparky’s gets its point across. The Sparky’s bottle cap  abandons the bland standard set by most other root beer companies, opting instead for a colorful red and white striped cap.  Finally, the label states Sparky’s laudable motto, “Leading The Root Beer Revival.”

Sparky’s has a serious root beer bite.  We are talking about a harsh bite.  Drinking this root beer is not like a simple walk through a meadow.  It is like climbing Mt. Everest and then getting kicked in the face by a donkey.  My daughter, and root beer review partner, summed the experience of drinking Sparky’s up this way: “It’s good.  It’s powerful.  It’s almost so powerful it’s disgusting.”  Although Sparky’s bite is almost overwhelming, that is not to say that the root beer is not good.  Both my daughter and I had mixed feelings about Sparky’s, and enjoyed the root beer at times much more than at other times.  Everyone should give this root beer a try to see where they stand on the flavor. 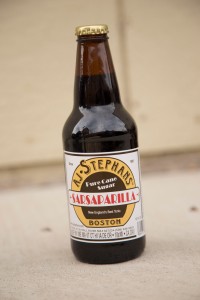 AJ Stephens Sarsaparilla is the first AJ Stephans beverage I have had the opportunity to review.   This Massachussetts drink, around since the prohibition days of 1926, advertises itself as “New England’s Best Tonic.”  Does that mean this sarsaparilla has medicinal properties?  Will it give you restored strength and increased vigor?  Medical study results are inconclusive. 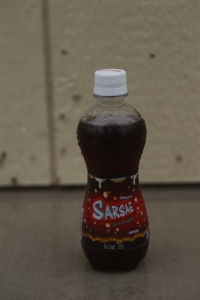 Purchase Location: Given to me by my sister

I am breaking my own rule.  Generally, this website is dedicated to reviewing only root beverages from glass bottles.  However, I thought an exception should be made for a soda making its way to me all the way from China.  I should be accommodating to my international guest, shouldn’t I?  My sister recently spent some time teaching English in China, and was kind enough to bring this soda home for me.

Sarsi is a sarsaparilla soft drink available in most Asian countries.  Sarsae is a brand of sarsi, the most popular sarsi drink in Hong Kong.  Sarsae is made by the A.S. Watson Group, which is the largest health and beauty retail group in Hong Kong.  It has over 11,000 stores worldwide, and serves over 27 million customers per week.

Sarsae has a distinct flavor from sarsaparilla found in the U.S.  It has a a deep brown sugar and molasses flavor.  The flavor reminded me a lot of the concentrated and unrefined clump of sugar known in Mexico as piloncillo (I just learned that piloncillo is called panela in English). I am not a huge fan of piloncillo, and I was not a huge fan of Sarsae.  Sarsae has very little carbonation and its deep, dark flavor is slightly bitter.  I found myself hesitant to take large sips of Sarsae.  I ended up not finishing the drink.  It was not terrible, but I would be more than happy to never drink it again.

The Abita Brewing Company has a announced that their craft-brewed root beer will now be available in cans for the first time.  Find the whole story at http://www.bevnet.com/news/2015/abita-root-beer-now-available-in-cans.  See how Abita Root Beer (the glass bottle version) stacks up in its Root Beer Respect review here.

Fitz’s Root Beer is made according to its original recipe developed in St. Louis in 1947.  Fitz’s Root Beer was originally sold in a drive-in hamburger stand in the St. Louis suburb of Richmond Heights.  In 1970, the drive-in was shut down and beverage production was discontinued.  In 1993, Fitz’s was resurrected, with the opening of a new restaurant.  Fitz’s purchased an authentic 1940’s bottling line to reproduce its root beer.  The bottling line was refurbished and installed in the restaurant where it is visible from every table on the main floor.  When fully operational, the bottling line can turn out a bottle of soda every second.

Fitz’s has a colorful label.  Both the label and the bottle cap have the same cursive design.  Interestingly, the bottle cap is designed to look like a bottle cap.  It does.

Fitz’s has a medium-strong root beer bite; a good herbal flavor. Fitz’s also has hint of vanilla which peeks out from it’s dark, rich base. All of these flavors are delivered too your mouth by way of the perfect amount of bubbly carbonation. We should all be grateful that Fitz’s Root Beer has been revived. It is a very worthwhile beverage.

Virgil’s Special Edition Bavarian Nutmeg Root Beer is so good-looking in its over-sized 16.9 fluid ounce bottle with its resealable top that I felt a little guilty even thinking of opening it.  Yet this special edition beverage called out to me.  How can you resist a root beer claiming to be “So Pure, So Rich, And Creamy, You’ll Swear It’s Made In Heaven”?  Claiming to be the root beer equivalent of what Ben and Jerry’s is to ice cream?  You can’t.  Well, I couldn’t.  I did, however, think it would be best to drink this brew on a special occasion, an occasion worthy of Virgil’s Special Edition Bavarian Nutmeg Root Beer.  Super Bowl weekend seemed to be an appropriate event.

Before delving into the details of the drink itself, I must make one more comment on its glass bottle.  The Special Edition bottle is not only over-sized, but the opening of the bottle is smooth with a great lip feel.  I never before realized how nice good lip feel can be.  With my lips relaxed and comfortable, I was ready to dive into this root beer.  Now it was my palate’s turn to be spoiled.   Virgil’s Special Edition Bavarian Nutmeg Root Beer has a long list of all-natural spices which are combined to make an extremely smooth and satisfying soda.  The initial taste is highlighted by Chinese wintergreen and sweet birch from the southern United States.  They create a light and sweet creamy taste.  Then Spanish anise and French licorice kick in.  Although the flavor was noticeably licorice in quality, it was smooth and creamy throughout, not a hard licorice flavor.  Although the original iteration of Virgil’s is a perfectly good root beer, I found Virgil’s Special Edition to be a definite step up from the original variety.  This is an expensive soda, but every once in a while everybody deserves a good celebration or special event root beer.  This could certainly be that root beer.